HBMA was formed in 1993 by a core group of individuals who had a vision of a forum, rich in resources, to guide their collective efforts towards a highly professional image within the medical community.

​Over the past decade HBMA has responded to the many challenges facing our industry. No longer does this industry live in a world of super bills and paper claims, but rather in a world of electronic claims and remittance. Technology now rules the world of medical claims processing and HBMA is central to not only managing the adjudication of claims, but the rules that govern the process.

As was the case in the early 1990’s, there still are a small number of large companies—some with thousands of employees and hundreds of millions of dollars in revenue—and a large number of small companies—most with less than fifty employees and less than four million dollars in revenue. While the majority of billing companies eventually specialize in a few medical specialties, some serve a wide array of specialties. Large or small, specialized or diverse, billing companies’ clientele is comprised of about 60% hospital based physicians, approximately 30% office-based physicians and about 10% allied healthcare providers.

Today, it is estimated that there are nearly 2,000 billing companies nationwide. Although HBMA membership represents less than 50% of the total number of medical billing companies, they do represent nearly 80% of claims submitted by third party medical billing companies on behalf of providers. The average HBMA Member has 40-50 employees, uses commercial software, has been in operation over five years, has company revenues of $2.5 to $3.5 million and processes about 350,000 to 400,000 claims per year. HBMA membership includes most of the nation’s largest billing companies. Nearly half of HBMA members have clients in more than one state. HBMA members collectively submit nearly one-third of all initial medical claims to the country’s governmental and commercial payors, with the majority of the other two thirds submitted directly by providers. HBMA members are constantly seeking ways to improve their efficiency, productivity, technical and operating skills, in an effort ability to serve and anticipate their clients’ needs, and of course, grow their companies. Despite its modest membership size compared to other healthcare trade and professional associations, HBMA has established itself as a recognized industry revenue cycle management authority by both the commercial insurance industry and the governmental agencies that regulate or otherwise affect the U.S. healthcare system. With increasing frequency, CMS and other agencies regularly seek HBMA’s input and commentary on proposed regulatory, operational changes and proposed legislation.

HBMA continues to dedicate membership dues and other income to improving the quality and diversity of information and educational offerings, ongoing and expanded advocacy at the federal level, and new and innovative services for its members. HBMA continues to expand its influence through meaningful relationships with other related not-for-profit associations in an effort to promote administrative simplification and efficient claim management. 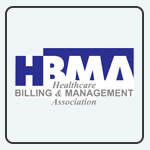